Spiders have a seemingly impossible range of locomotion: they walk, run, jump, swim and even use their silk as “balloons” to float in the wind. But it’s the flip-flopping and tumbling by some Huntsman spiders that are truly amazing. But before being introduced to the flipping huntsman, it’s important to know exactly how spiders move.

Spiders are known to crawl along pretty much all known surfaces, including up our legs, or over our arms! The secret to their success is a system that uses a combination of dynamic attachment (a kind of stickiness), tiny hairs on the ends of their legs, and their strength. In a study done by the University of Kiel, it was found that the amount of force that a spider exerts on a vertical surface is three to four times the body weight of the spider. And the smaller the spider, the greater the force, which is the reason why larger spiders (such as tarantulas) have a more difficult time clinging to slippery surfaces. (Sigh of relief ….!)

So they can hang around, but how do they actually move?

Spiders are unusual in using their blood (body fluid or hemolymph) through what is called hydrostatic pressure to move, almost like tiny robots.

A spider’s body fluid fills the cephalothorax (the part that contains among other organs, the mouth, eyes and legs) and the abdomen (which contains the lungs, silk producing organs, and butt). The fluid is not contained in veins, but allows the organs to be fully soaked in it. In addition, vertebrates, like humans, move their limbs through the use of extensor muscles (allowing for limbs to be extended), and flexor muscles (which naturally contract limbs, or make them bend). Spiders unfortunately lack extensor muscles. ​

This means that spiders need to extend their eight legs by pumping fluid into them, and allowing their flexor muscles to cause them to naturally contract as the fluid is pumped out again. The fluid is alternately pumped through the legs, with the eight legs acting in four pairs of two. So while two pairs of legs are in the air, the other two pairs are on the ground for support, and in this way a spider moves along. Jip, like a Star Wars spider droid. 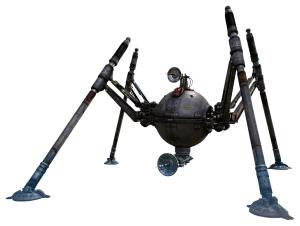 ​The efficiency, power and speed at which the hemolymph is pumped allows spiders to move, and the whole process of pumping and flexing can be done in a fraction of a second. The hydraulic power can be powerful enough to assist jumping spiders to jump between 30 and 40 times their own length, and fast enough to allow the giant house spider (Eratigena atrica) to run at a speed of around 1.73 ft/s (0.53 meters per second).

The wheel spider or golden wheel spider (Carparachne aureoflava), is a huntsman spider native to the Namib Desert of Southern Africa. These spiders don’t weave a web. Instead they construct deep burrows in sand dunes, generally on somewhat steep inclines to escape the scorching heat of the desert. 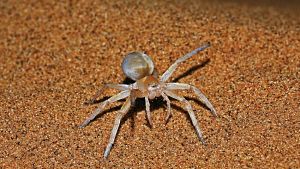 They are nocturnal, and are mostly active during the night to hunt prey. But at times it needs to construct a new burrow during the day, and it’s during the initial stages of making this burrow, that the spider is vulnerable to attack. They usually fall prey to the parasitic pompilid wasps that sting and paralyze them, then drags them to their nests where the wasps lay eggs in them.

These wasps can move around at lightening speed, and since wheel spiders, like all spiders, have sluggish metabolisms, endurance in outrunning the wasps isn’t possible. So, if the golden wheel spider is unable to fight off the wasp, it escapes in a peculiar way by bending all its legs and flipping onto its side. The angle of the legs allows the spider to do cartwheels down a sand dune at an amazing speed of up to 1 meter per second or 44 turns per second. Now that”s fast!

If acrobatics sounds like an amazing way for a spider to move, the flic-flac spider (Cebrennus rechenbergi), also known as cartwheeling spider, has won the gold medal!

​This huntsman lives in the Erg Chebbi desert of Morocco, and like it’s southern cousin, tends to do it’s hunting during the night. It also constructs a silk lined burrow in the sand to escape the sun during the day. 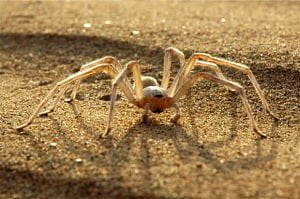 When threatened, this huntsman can escape by doubling its normal walking speed by flipping around, similar to acrobatic flic-flac movements used by gymnasts.

And unlike the Namib wheel spider that can only cartwheel downhill, the flic-flac spider can flip in any direction, downhill and up, even at a 40 percent incline.

When there’s trouble, the flic-flac spider can reach an astonishing speed of up to 2 meters per second using forward or back flips to evade threats.

Now that’s flipping Huntsman for you!

Check out some of our interesting careers with spiders:

One Zoo Tree is a world first in assisting children to plan a path towards their dream career in working with animals. Join our Community TODAY and learn even more about the Huntsman spider, other arachnids and almost a thousand other species of animals.