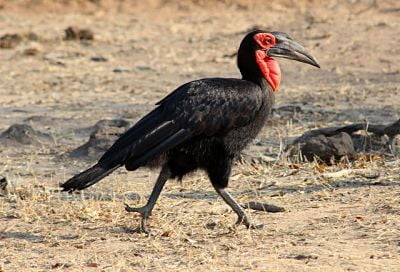 Of the 55 existing species of hornbill, the Southern Ground Hornbill is the largest at 50 inches (129 cm). Females are distinguished from their male counterparts by the violet-colored patch on their throats, while males have a pure red face and throat.

This bird tends to occupy woodlands and savannahs in which it can forage for small animals, fruit, and seeds, and is found in lesser numbers in the eastern and southern parts of Africa.

They are fascinating birds, preferring to walk than to fly. They form family groups of adults and juveniles and establish territories as large as 40 sq miles (100 sq km). This bird communicates easily, particularly in a group, which can become quite loud. The call is deep and loud, carrying over long distances. When the call is chorused, it can be heard some three kilometers away.

While maintaining a healthy diet of frogs, insects, snakes and even small mammals, they can reach a lifespan of 70 years.

The Southern Ground Hornbill mates between September and December and the breeding pair remains monogamous. The female will usually lay two eggs, with the first hatching before the second and thus also become the dominant chick. This means that only the one chick will survive to fledgling stage.

The Southern Ground Hornbill’s numbers are in a steady decline, and it is now classified as being Vulnerable and, in some places, Critically Endangered. In South Africa, this is due to almost three-quarters of its habitat being lost to overgrazing, a loss of suitable breeding trees, the land being converted into commercial farms, and so on.

A person that studies and works with birds is called an ornithologist. Ornithologists may study the behavior, physiology, and conservation of birds and bird habitats. This work often involves surveying, recording and reporting on bird activity. Ornithologists may either generalize or specialize in a particular species or bird group.

However, many professionals may only spend part of their time researching birds. They may also work as wildlife biologists, ecologists, rescuers and sanctuary owners, land managers, researchers, environmental educators, legislative advocates, eco-tour guides, or in the pet industry.

Join the One Zoo Tree Community and learn more about all of the fascinating careers in working with birds, as well as how to work with each species.

Photo by Jolene Qually from Pexels