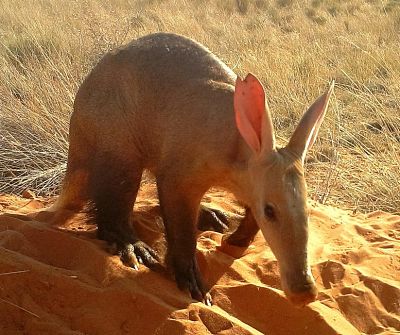 The solitary behaviour of the Aardvark

An Aardvark is a medium sized mammal that is pig-like in appearance with an elongated head, short neck and large ears.

As it is nocturnal and has poor eyesight, the aardvark is cautious upon leaving its burrow. It comes to the entrance and stands there motionless for several minutes. Then it leaps out in powerful jumps and stops, raises up on its legs, perks up its ears and turns its head in all directions. If there are no sounds, it makes a few more leaps and finally moves at a slow trot to look for food. Its general movement is medium paced and slightly swings its nose from side to side in search of food.

Aardvarks can dig fast or run in zigzag fashion to elude enemies, but if all else fails, they will strike with their claws, tail and shoulders, sometimes flipping onto their backs lying motionless except to lash out with all four feet. The aardvark is known to be a good swimmer and has been witnessed successfully swimming in strong currents.

Sexual maturity is reached at around two years of age. Aardvarks are polygamous, which means that one male mates with a number of females. Due to their solitary and territorial behavior, these animals socialize only when mating. After a gestation period of seven months, one cub weighing around 1.7 to 1.9 kilograms (3.7 to 4.2 lb). The mating season differs from region to region, with the medium mating season being late winter, early spring.

Very little is known of the young of wild aardvark, and most data is captured by researching captive specimens. When born, the young are pink and hairless with many wrinkles. When nursing, it will nurse off each teat in succession. After two weeks, the folds of skin disappear and after three, the ears can be held upright. After 5 to 6 weeks, body hair starts growing.

It is able to leave the burrow to accompany its mother after only two weeks, can eat solids after about three months, and is fully weaned between three months and 16 weeks. At six months of age, it is able to dig its own burrows. Male aardvarks leave their mothers completely during the next mating season, but females stay with mothers until the birth of the next cub.

Species:
There is only one species of Aardvark. The Tubulidentata order is unique because it is the only order of mammals in which there is only one living representative, Orycteropodidae is the only family in the order, and Orycteropus afer is the only species. The closest living relatives of the aardvark are the elephant shrews, tenrecs and golden moles, and elephant.

Distribution:
They are present throughout sub-Saharan Africa all the way to South Africa with few exceptions. These exceptions include the coastal areas of Namibia, Ivory Coast, and Ghana. They are not found in Madagascar. They have been documented as high as 3,200 metres (10,500 ft) in Ethiopia.

Lifespan:
Aardvarks may live up to 25 years in the wild, but this is only an estimate, as there is still insufficient data.

What do Aardvarks eat?

The aardvark is an omnivore and feeds exclusively on ants and termites (thus properly described as being a formivore). They do not eat all kinds of ants, as they prefer not to eat the African driver ant and red ants.

Aardvarks are also known to eat the pupae of dung rolling beetles (Scarabaeidae) and may well eat other insects occasionally. However, it is unlikely that this kind of prey is important for aardvark subsistence. Studies have found that the aardvark does vary its diet with one specific plant, called the aardvark cucumber (Cucumis humifructus). Seeds from this plant have been found in feces and the plant has been found growing at the entrance of burrows where droppings are often deposited. It is possible that they eat the cucumbers for water, or to help neutralize the acidity of some of the ant species they eat.

Studies in South Africa have concluded that aardvarks consume far more ants than termites, with ants constituting almost 80% of their diet.

Aardvark are considered a keystone species (meaning that they play a unique and crucial role in the way an ecosystem functions).

Population Control:
Aardvark help maintain the numbers of ants and termites in an ecosystem. Many of the species that they eat are avoided by other animals. The aardvark controls the numbers, which if left unchecked, could devastate vegetation.

Habitat Creators:
Aardvark are Africa’s premier excavators. Their spade-like claws and muscular build are perfectly adapted to digging. Abandoned aardvark burrows are an important refuge and provide shelter for a number of species ranging from den sites for African Wild Dogs, to shelter for Hyena, Honey Badgers, Jackals, Mongoose, Scrub Hares, rodents and even some bird species.

One Zoo Tree is a FREE source of career information for people who want to work with animals. Find the best info on careers, as well as the animals you can work with.

If you want to learn more about aardvarks, either join the Community, or have a look at the Mammals pages and Courses.